War, as any soldier will tell you, is hell. That’s why it’s rare to come across a war story that is upbeat and uplifting for all parties involved. But such tales do exist, and it’s a joy to seem them brought to light. Which is exactly what our PICK OF THE WEEK has done with The Berlin Candy Bomber, a two-minute explanation video that blends animation with interview footage to tell the tale of, Gail Halvorsen, a retired officer in the United States Air Force who, during World War II, was best known to children all over Germany as “The Chocolate Flier.” 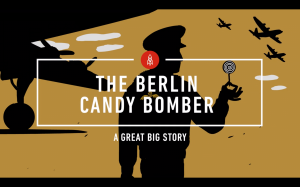 The Berlin Candy Bomber was produced by Great Big Story, a video network dedicated to sharing untold, overlooked and “flat-out amazing” tales. A goal that is met and exceeded, thanks in large part to the outstanding work of Sean Lattrell, a Brooklyn-based animator who lifts an inspiring story to something that is both impactful and indelible. Since graduating from Sarasota’s Ringling School of Art and Design in 1993, Lattrell has put together a portfolio of top-notch work that stretches from beloved cult television shows (like Strangers With Candy and Ugly Americans) to sterling brand work (for companies like Nike and Walmart). Whatever the venue, Lattrell’s character animation really shines, as it does very brightly in our PICK OF THE WEEK…

Most war stories (appropriately) are shrouded in chaos. Loud noises, lots of commotion and often–due to the nature of war–some narrative anarchy. That’s just what happens when lives are on the line and large numbers of people–coming and going, coming and going–are congregated in one place. In short, and very understandably, there’s lot of commotion.

But The Berlin Candy Bomber judiciously manages to extract that wartime commotion without belittling its actuality or sacrificing a sense of authenticity. And the way this is accomplished is by funnelling the story through its main character, Gail Halvorsen. Because this entire explainer is told through his voiceover narration, we are able to develop an intimacy with Halvorsen and understanding about what he is telling us and why. Or, put another way, we as the audience can easily accept that what we are seeing is not the world and events as they really truly are (as if they were captured on film), but that we are seeing the world and events through one man’s memory.

When we remember things, we don’t memorize entire landscapes and the nuances of irrelevant details, we remember primarily what we see and what’s important to us. And not always, it should be noted, in a fully linear fashion. We remember fragments of moments and, even during a singular scene/experience, we’ll recall different parts with a different scope of perspective. Sometimes it will feel like we’re zoomed in on a detail, other times we’ll recall a wider landscape of interaction. And with Lattrell’s adept animation, he is able to deliver a tone and pacing that feels akin to walking through a memory.

For example, look at how Lattrell opens up with a wide, fleshed out backdrop and then, as we focus more on the children, the rest of the world vanishes. 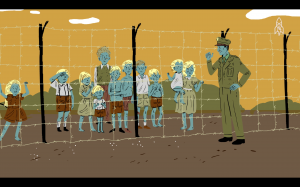 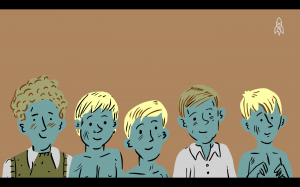 Or how giving sticks of gum to the children is compacted to what feels like ultra-focused still-images of that experience. 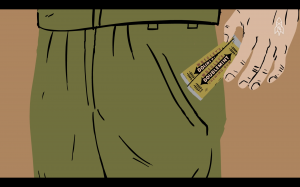 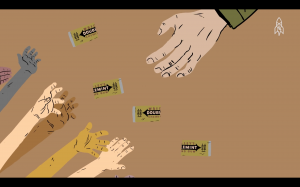 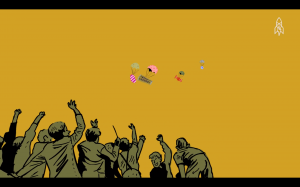 The Blend of Animation With Real-Life Interview Footage

A simple transitioning from one visual medium to another is often jarring. Oscillating back and forth several times? That seems like a recipe for disaster. But The Berlin Candy Bomber nimbly avoids this fate. How is the explainer able to pull this off?

The primary reasons are twofold:

With the interview footage, the soft focus creates a blurred background on either side of Halvorsen that eases the viewer each time that transition is made. At the same time, the multiplicity of lights creates a dreamlike quality that not only aids the toggle back and forth, but also enhances that belief that we are traversing through someone else’s memory. 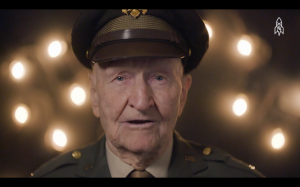 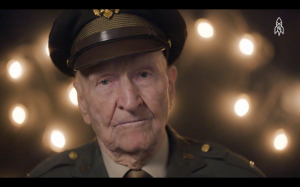 Now, given the emphasis that this places on Halvorsen’s face, the most likely source of aesthetic contradiction becomes the frequent transition between Animated Halvorsen and Real-life Halvorsen. A potential issue that’s compounded by the fact that–at the time of this interview–Gail Halvorsen is 95 years old and the version of him we see depicted in the animated story is only about 28 years old. So…what is an animator to do?

Concede that they should look nothing alike and accept that the viewer will be jarred?

Depict Young Gail Halvorsen as closer to 95 than 28?

But what Sean Lattrell wisely does is this: rarely show Young Halvorsen’s face. Instead, we tend to see the world from his POV (which fits with the memory-like aspect) or, when we see him, it’s most often from a different angle. 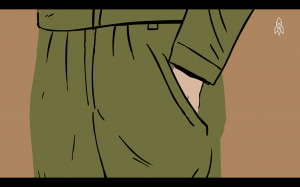 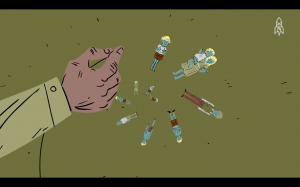 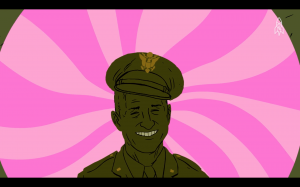 This is an elegant solution, but we’d be remiss not to mention that when you do see Halvorsen’s face (a couple times early on), Lattrell cleverly colors him in a stylized blue and presents a stoic, somewhat ageless-looking man who meshes well with his real-life counterpart. 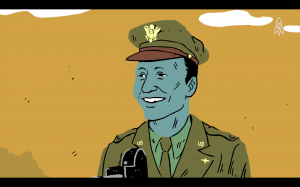 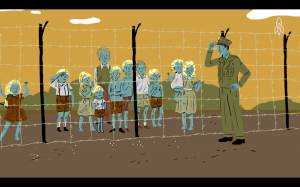 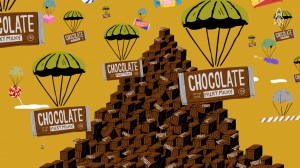 Fun, but not silly. Fantastical, but conceptually accessible. I’d like a blown-up image of this to hang somewhere in my home…