Sometimes, you don’t want to know how the sausage gets made. An insider look at a process can be less than appealing. When it comes to the animation process, however, the ‘how’ is integral, fascinating, and fun. Here’s exactly how we craft our animated videos. Keep in mind that each technique and each video is different, so sometimes intermediate steps will be added or elided for the sake of a quicker turnaround.

Some clients come with fully fleshed out plans, others with just a fuzzy notion. Nonetheless, all projects kick off with a discovery session.

While we have a standardized creative questionnaire designed to get everything we need from clients, we prefer to run through it over the phone or in person. Organic conversations can yield so much more than form submissions—they allow us to branch off onto valuable tangents and learn more about your brand, your audience, your goals, and, of course, your message.

The script is the foundation of a great animation, perhaps the most pivotal part of the process. After absorbing your strategic aims, we craft an engaging, digestible story that speaks to your offering while entertaining the audience.

Deeply collaborative, the script is typically run through multiple versions as clients provide feedback and notes with each iteration. This holds true even if we aren’t writing them from scratch: when a client comes in with an apparently finished script in hand, we’ll add or tweak the visual descriptions to ensure that picture and word work perfectly together. Animated videos need to follow a very careful cadence; linking images with words takes a particular skillset that we’ve honed over the years.

Speaking of cadence (no pun intended), the voice-over is always recorded first. It’s far easier to match animation to an organic voice than for voice talent to sync speech to a structured animation after the fact.

Recording happens in one of two ways: old-school and new-school. The traditional method involves renting a recording studio, paying an outside sound engineer, and committing to a local voice-over artist. Simply put, it’s expensive and somewhat restrictive—we’ll usually do things the new way.

We source talent through Voice123, collecting up to 50 online auditions for a single project. These voice actors are armed with professional recording equipment and are able to send submissions quickly. After winnowing the field down to three or so stars, we’ll present the client with our recommendation and alternatives. Once all are agreed on the talent, we record until we’ve got the perfect take.

From there, we move into storyboards and animatics, where the animation truly starts to take shape. Storyboards contain four to six rough stills of the video per page, with the corresponding dialogue printed under each frame. Here’s an example of a storyboard we created for a TV spot for the Canadian cable company Eastlink: 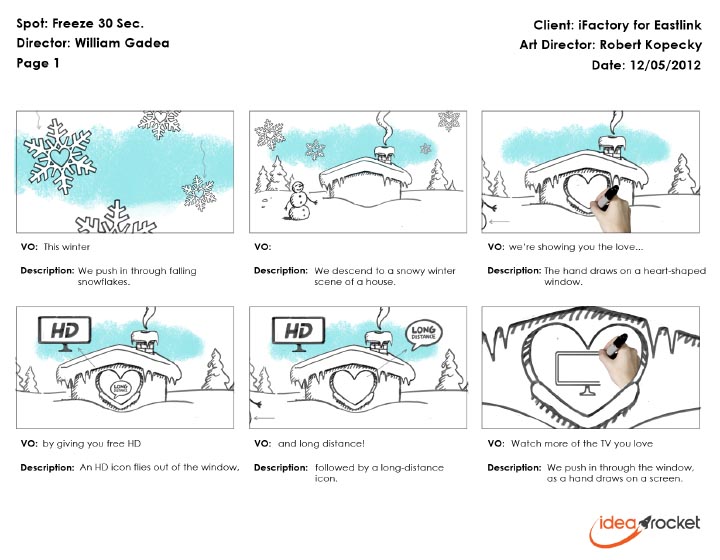 For most clients, however, we usually jump right into an animatic—think of it as the video version of a static storyboard: characters move, backgrounds pan, and scenes transition in time with the recording. The reason we do this is because it is usually easier for lay people to understand, and even for people that are familiar with the process, an animatic will provide more information: specifically, the timing of the images to the voiceover.

By the way, here’s the finished version of the storyboard above:

After the rough animatic, the layout animatic is created. This is when the art is first applied to the animation-to-be. In this stage, we develop and flesh out characters, background images, and props for the video. The layout animatic still lacks real animation; though simplified, it faithfully presents the look and feel of the final animation.

Sometimes, there are intermediate stages before the layout animatic. We’ll often first send style frames — images that convey the look and feel of the video, or character designs, if the video has characters. We’ll also decide on color schemes, fonts, and other smaller details at this point, taking client feedback into consideration as we go.

We had the bare bones of the video—now we add the supple sinews and skin to make it whole. Characters that jumped jerkily from pose to pose now move lithely, full of life. Motion graphics that once were static now dynamically sprint across the screen.

With the finished artwork now in place, the only thing left is a little aural ornamentation.

Here is a video we created that shows three steps of the process at once: storyboard (or rough) animatic, layout animatic, and final animation.

Depending on the project, music is either commissioned as an original work from a composer or selected from library sources.

While the first option is more expensive, technology has reduced the time and cost required. Original compositions have the ability to hit certain cues and match moods perfectly. Library sources are the more cost-effective option and are often an exceptional fit for what a video needs.

Sound effects are carefully woven in to accentuate and enhance the action on screen; we’re attentive never to add a sound effect just because we can. Rather than gratuitous slapstick, all our effects are added to serve the story and purpose of the video, never detracting or distracting from it.

With all the pieces finally together in harmony, we make just a few final edits—a trim here, a tweak there. We clean the audio tracks and add tiny details to the art, ensuring all is preened and polished.

After all that, the finalized video is exported and safely delivered into the client’s hands. Unlike your average street vendor supplier, we take pride in the process of our craft, leaving nothing to doubt.

Contact us today to see if our animated services are right for your business. 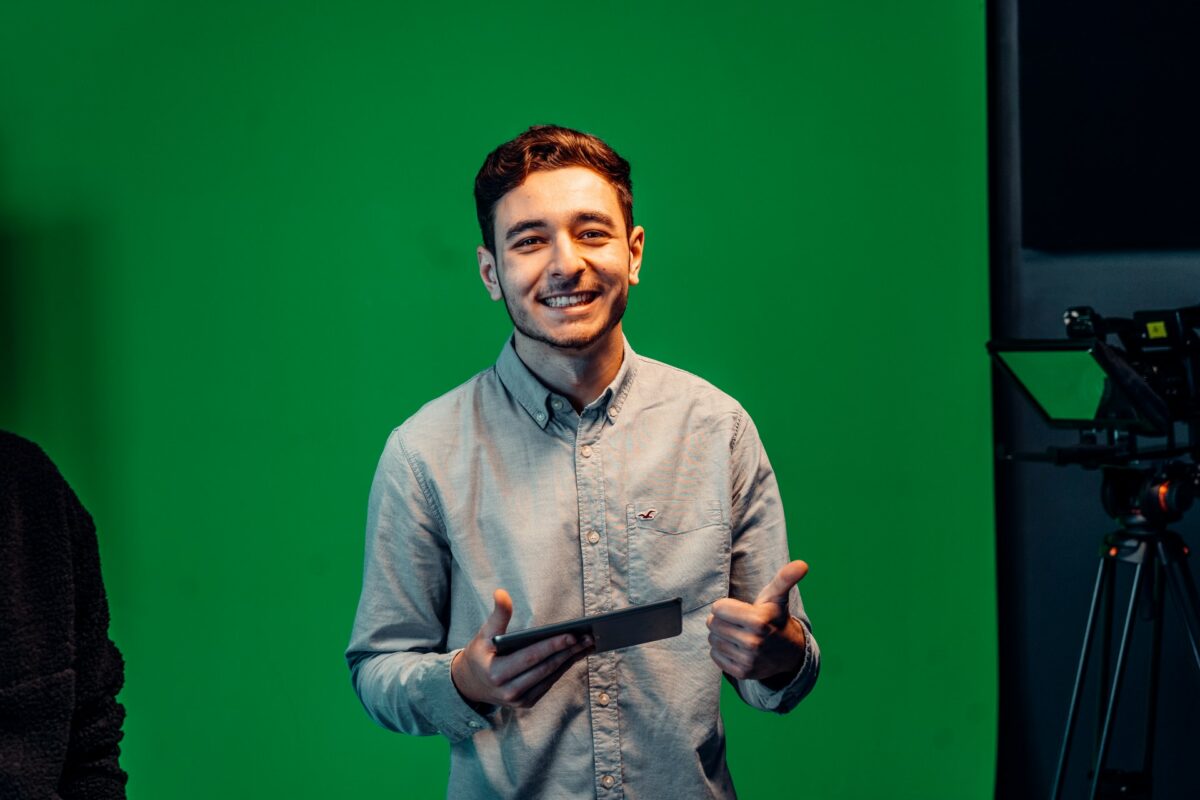