I highly recommend Marc Andreessen’s interview with Reed Hastings on the a16z podcast. Netflix, the company that Hastings founded, has done many remarkable things. In 1997, it created a DVD-by-mail category where none had existed before. Starting in 2007, it disrupted this business model by switching to streaming, something which as Andreessen notes in the podcast, is extremely difficult to do. (As Clayton Christensen has observed, it’s hard for a company to disrupt itself because it is attacking its own margins and value networks.) Finally, Netflix started creating its own entertainment properties, a challenge which has often vexed big companies, and has succeeded in spectacular fashion.

Any one of these challenges are the business equivalent of the Amanar Vault. Netflix keeps making them look easy.

But as much as Andreessen gives Hastings his props, I’m not sure he’s fully illuminating Hastings’ merit. The execution might have been brilliant, but the strategy was beyond brilliant.

It’s not like no one knew that streaming entertainment to the home was going to be a great business. Everybody knew that. Why didn’t they succeed? Steve Jobs was unusually sharp in diagnosing why. (And I apologize for not finding a link… I remember seeing this in a video interview shot around 2006.) Streaming video to the home was not a technology problem and not a vision problem, he said, it’s a path-to-market problem.

To put it another way, getting to subscription-based streaming was a chicken-or-the-egg situation. You can’t sign people up to a subscription if there is no entertainment to provide them, but you can’t license entertainment without a subscription base. Netflix circumvented this challenge by making streaming a complementary (and complimentary!) service to an existing subscription. And they foresaw this path in 1997 (which is why the company was called Netflix rather than Mailflix.)

Why didn’t other companies that had one half of the requisites make a move? A company like HBO, for instance, had subscribers; a company like ABC-Disney had content. But both would have trouble disrupting themselves for the same reason we have mentioned previously: they would be attacking their value networks. HBO would be ticking off the cable companies that are its major partners; ABC-Disney would be ticking off its current licensees too, but they would also be taking focus away from businesses where they were making comfortable margins. (Eventually, both would make late entries into the streaming market, as a matter of survival: HBO with HBO Now, and ABC-Disney with Hulu.)

At the end of the day, Netflix beat out every major player that had their eye on that space: Apple, YouTube, Tivo, Sony, and others. It wasn’t just an Amanar vault; it was an Amanar vault into just the right thimble of water. 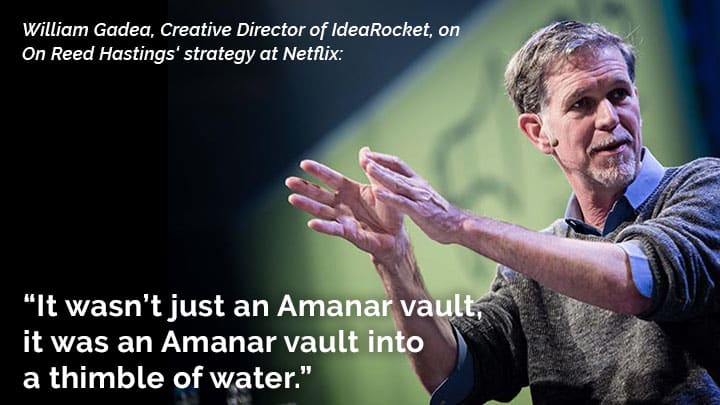 The interview is also interesting because Andreessen asks Hastings about what the Netflix brand is. Hastings replies that in an era of mass customization, Netflix is whatever you want it to be. It will show you the shows that it thinks you will like, so that no matter who you are you will think: “Netflix gets me.”

If you project this out to the world beyond streaming entertainment, this is an astonishing concept: the death of the fixed brand. To a certain degree, this process has already begun. Big brands know how to market differently to different geographies and ethnic groups. Potentially, the brand personality and promise – even it’s graphic identity – could also be micro-targeted. If you’re posting anti-Trump on Facebook, a beer might bond with you on your blue-state politics, while also being the sort of drink you can take to a deer blind for a red-state customer. There are some parts of the brand that are more difficult to customize: the packaging and the product itself. But in a world where digital is on the ascendancy and mass market channels are on the wane, the customized brand will be an important trend.