Today, we’re pleased to kick off an exciting new series for the blog: Interviews with Animators, where each week we’ll be chatting with someone who works in the trenches to get an inside look at what it’s like to be an animator.

To start the series off with a bang, we were lucky enough to sit down with Natalie Labarre. If that name sounds familiar, it might be because her enchanting short animated film Papa has been screening at festivals (and winning awards) around the globe. To learn more about the making of that film and the sources of Labarre’s inspiration, check out our interview below the jump…

Blake Harris: First off, I wanted to ask about where the inspiration came from. How did you come up with the idea for Papa?

Natalie Labarre: This was made as my graduation film, so I knew I had to come up with something. I was already making stories about my dad, so when it was time to come up with an idea that was probably on my mind.

Blake Harris: Well I’m glad you brought that up—your dad—because the film is called “Papa” and in the credits you show a picture of you, as a young girl, with your father. So I was wondering how autobiographical this film actually was.

Natalie Labarre: So, for some reason, most of my art is based on my life. And definitely my father, for some reason. Which drives my mom crazy. She’s like: hello, can you make something about me?! Like I’ve done portraits of him, for fine art. Oil paintings and that was exhibited a little bit. I don’t know, for some reason he inspires me because he’s a total character. 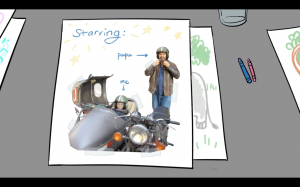 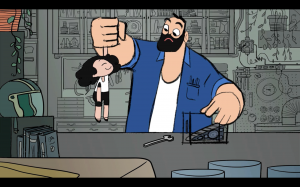 Blake Harris: Is he actually an inventor?

Natalie Labarre: He’s a carpenter by trade, but he’s a great artist and he’s invented machines to help with his work, like upgrades on hand tools and stuff like that. He’s a French guy—as French as you get—and he sort of doesn’t function as a normal person; he’s very creative and sometimes it gets in the way of normal life.

Blake Harris: And how realistic was the relationship, or dynamic, in the film?

Natalie Labarre: The monster game in the film—you know, where I’m on his back—that’s real. My drawing on his stuff is real (and I got in big time trouble for that). But as I said, my dad’s a great artist.  He would teach me how to sculpt and draw. And whenever I drew something, he’d always say, “Oh it could be worse.” Like that was his mentality. [laughing a little] So I just kept trying to get better so that when I showed it to him, one day he’d say, “That’s amazing!” 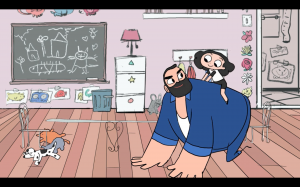 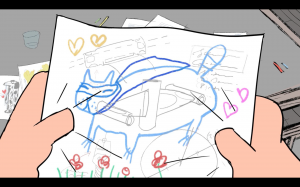 Blake Harris: So what did he say to this?

Natalie Labarre: Oh, he hates it.

Natalie Labarre: Yeah, he totally hates it. [speaking in a thick French accent] “I look like a fool! You make me look stupid and abusive.” Not good. [laughing]

Blake Harris: I can’t believe that! [sarcastic] Now I understand why there’s no dialogue in the film! 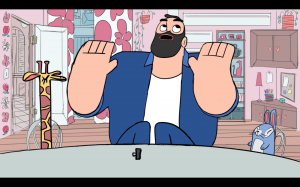 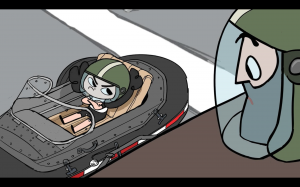 Blake Harris: Tell me a little about that, actually. What made you decide not to have dialogue in your film?

Natalie Labarre: Oh, my stuff never has dialogue. I’ve just always been more comfortable with that for some reason. Maybe because I’m inspired by Charlie Chaplin and elements physical comedy. I don’t know exactly. But I tend to like for my stories to rest on facial expressions rather than words.

Blake Harris: Which, over the course of 6 minutes, I imagine became a challenge. Tell me about some of the other challenges of making Papa

Natalie Labarre: One of the big challenges was to make a living when I was making it. I’d work on the film about half the day, and then the other half I’d do odd-jobs, sometimes not even animation-related. Another challenge was the digital animation. In school, the focus was traditional animation on paper, which I really appreciate, but making a 6 minute film on paper… there was just no way. I would end up with piles and piles of paper to make this thing! So I needed to go digital, and that transition was tougher for me than I expected.

Blake Harris: Which program did you end up using?

Natalie Labarre: The program I used was called TVPaint. It was a fairly new program and I’d heard a lot of good things about it, but the problem was that nobody knew how to use it! Lucky, one of my friends—who I thanked in the credits, her name is Mari Jaye Blanchard—she spent several hours helping me out.

Blake Harris: Do you have a favorite part of the film? 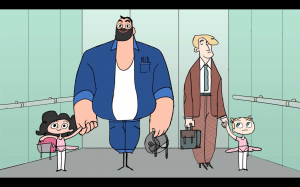 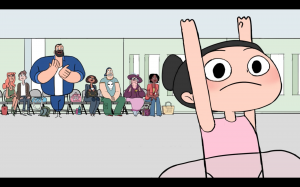 Blake Harris: Great. And just one last question: now that the film has screened at several locations and has gotten so much nice feedback online, I was wondering if you had a favorite reaction (or reactions) that stood out in your mind?

Natalie Labarre: Since it tends to screen for kids, I’ve been super lucky to have juries and audiences who are entirely children. And they ask the most awesome questions; things like, “Do you not have a mom?” I do, she’s just not in it!

Natalie Labarre: The kids also want to know if I really got hurt when I fell. And I say, “No, I was okay.” Or they want to know what flavor the ice cream in the film is. Just all these really important questions. I think in the future I’ll definitely make stuff for kids because that’s more my mentality. It’s just so much fun. 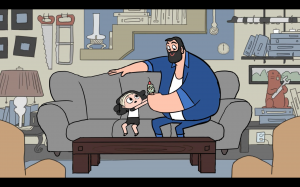 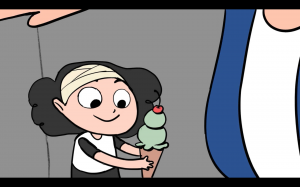 Blake Harris: One more question: did you set out to make a kids film? Or did it just turn out that the animated film you made happened to be perfect for kids?

Natalie Labarre: I didn’t! It’s just that I’m super immature and that little girl is how I see myself if I’m not looking in the mirror. That’s where I’m at. So it was definitely not intended for kids. But when it was done I was like: Oh man, I made a kids film! And I’m so happy about that.

To learn more about Natalie Labarre’s work, you can visit her on vimeo or tumblr. You can also follow her on twitter at @fattnatt. And if you are interested in animation for business, check out our work!