To create a high-quality video, you need to do more than tell a compelling story. Even the most amazing video will underperform if it’s uploaded in the wrong aspect ratio.

You’ve seen aspect ratio mismatch at work if you’ve ever watched an old movie on a modern TV screen. The black bars at the top and bottom of the screen might have distracted you. Those bars made up for the difference in aspect ratio between a movie theater screen and your home television. Without them, the image would need to be stretched or trimmed to fit your TV.

Simply put, aspect ratio is the relation between the width of an image and its height. Usually, it’s written as two numbers separated by a colon. Like this: 16:9. If the first number is the largest, you’re dealing with a horizontal image. If the second number is larger, your image is vertical. 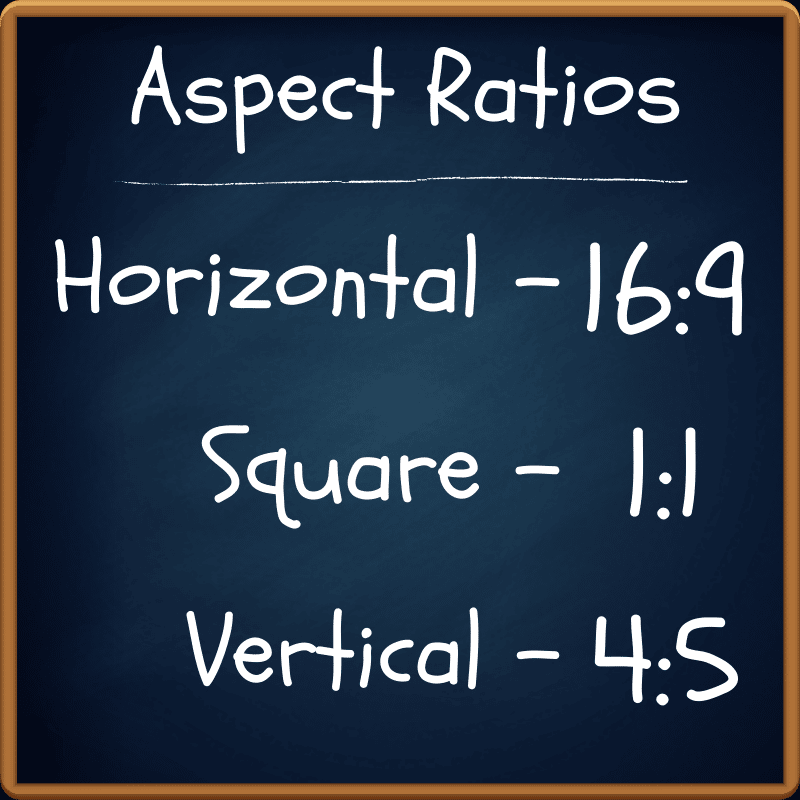 There are dozens of aspect ratios your video could take. You might need one for a TV commercial, another for an Instagram Reels post, and yet another for your Facebook feed. But in the early days of video, there was just one standard aspect ratio that everyone used.

A short history of aspect ratios

Back in the days before flat-screen televisions, 4:3 was the most common aspect ratio. It was based on the shape of a standard strip of film. Because 35mm was the only mass-produced film on the market for decades, the aspect ratio standard remained 4:3 for about 50 years. It wasn’t until the breakthrough of widescreen film in the 1950s that aspect ratios started to change.

In the 1950s, widescreen travel films showed audiences a panoramic view for the first time. Shot and projected on a special three-camera Cinemarama system, this luscious widescreen format floored audiences.

Then in 1953, 20th Century Fox developed a special lens, called a Cinemascope. It stretched the image to achieve a wider view. The results were spectacular, except for the resolution problem.

When you stretch a 4:3 image you don’t magically make the image bigger—you have to enhance the grain of the film. It’s just like blowing up a photo to hang on your wall. When you increase the size, you’ll start to see pixels. You can’t just make an image bigger, you have to shoot in a whole new format. Which is exactly what filmmakers did.

In the late 1980’s everything changed again with the switch to digital media and HD TVs. Today, if you’re uploading video to YouTube, Vimeo, or another video sharing site, you’ll probably use the 16:9 aspect ratio. Ditto for commercials and TV shows. It turns out that 16:9 is the mathematical middle ground between the traditional 4:3 standard and the 2:35 cinematic widescreen format. Add some black boxes and you could display your video on any platform. This quick-fix made adapting old films to digital screens much simpler.

Unless you’re a big fan of distracting black boxes, you should create your video for the size of your final display. In the old days, that was easy. There was just one standard size. Today, it’s not so simple.

You might be thinking that 16:9 is the new standard, and you’re partly right. Your modern HD television is probably optimized for 16:9. That’s why YouTube and other video sites use it as their baseline. They want their content to look good whether it’s on your computer screen or streamed to your television.

But people don’t just watch videos on their televisions anymore. In fact, about 62% of viewers said they watch videos on mobile devices. Some of this is on YouTube and Vimeo, but social media sites are also getting in on the video trend. From ads to organic content there are half a dozen common aspect ratios you may need to use.

Here’s a quick breakdown of the latest recommended aspect ratios for different kinds of distribution.

Beginning in about 1997, television made a transition from the old 4:3 NTSC standard to a new 16:9 high resolution ATSC standard. The last NTSC transmitters shut down in 2018. If you are preparing a commercial for airing on broadcast, cable or OTT today you will need to create it in 1920 x 1080 pixel format (16:9).

Facebook recommends the following aspect ratios based on where the video will be placed on their platform.

Later, the social media post scheduling company, has a handy guide to Instagram photo and video posts. While several aspect ratios are allowed, the following are recommended for best results on Instagram.

Twitter sticks to three basic aspect ratios although the way they list them on their site can get a little confusing.

Pinterest uses various formats depending on where your ad or pin will display.

TikTok is the newest platform to include ad options. They keep things simple with three basic aspect ratios

One Aspect Ratio for Snapchat

Snapchat has the simplest guidelines of all, with 9:16 across all ad and organic placements.

The right aspect ratio every time

To make sure your video is perfectly sized every time, first, think about where you’ll be placing it. Then, create your video in that aspect ratio.

For help planning videos that fit any platform, work with the experts at IdeaRocket. We create videos in 2d and 3d animation, whiteboard animation, and live action. Our clients use their videos explain tech products and services, for healthcare purposes, to communicate with employees or to advertise in television, among other uses.  Contact us today to learn more.