What does it take to make a great explainer video? You know you need a great design, likable characters, and a story people want to watch. However, one of the most important elements of a truly great explainer video has nothing to do with the visuals. To make a video that gets results, you need quality audio. But don’t panic, audio newbies—creating quality audio for even low-budget video productions is easier than you think.

Chris Lavigne, video superhero and CEO at Wistia,knows exactly how important audio is to your explainer video project.

“Crappy audio can ruin even the greatest of videos.” — Chris Lavigne, Wistia

Chris stresses the importance of audio—especially in his video production tutorials—because he knows how quickly “crappy” sound can scare away viewers. If the voices aren’t clear, if there’s distortion, buzz, or other noise that makes the audio difficult to follow, viewers will abandon your video. 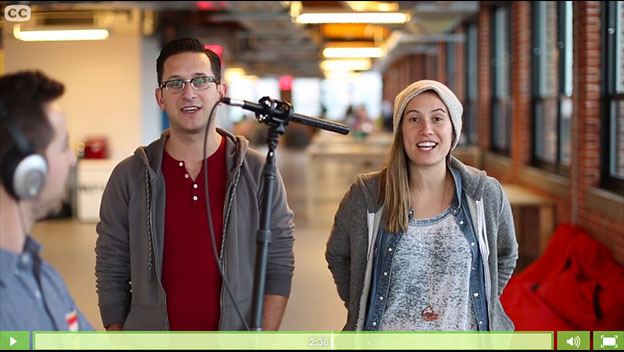 And don’t expect praise for your amazing audio quality. Most viewers take audio for granted. When it’s good, they don’t even notice. but when you mess it up…prepare for feedback.

People expect a quality video production to have sound that doesn’t distract or annoy them. That’s pretty much it.  Viewers will cut you a lot of slack as long as you satisfy this basic criteria. You don’t have to produce a platinum record or score an Oscar for best video soundtrack. You just need audio that meets these criteria:

For a real-life example of how audio can affect video watchability, let’s compare two real life examples. Both are from one of my favorite up and coming bands—Lake Street Dive. The two videos were shot one year apart, and you can see that the band learned a lot about audio quality during that time.

Let’s start with the video that has lots of room for improvement.

Watch this video for just 30 seconds and you’ll notice a few key points.

Oh, and the audio is really, really bad.  The wind noise alone is enough to make me stop listening. It completely overwhelms the band in several places. When you add the fact that the mike is too far away from the band, making them sound distant and flattening the overall sound, you realize how much difference audio really makes.

Now lets look at a video shot one year later to see what a difference great audio can make.

This video announced their EP release—Fun Machine. Just like the original video: 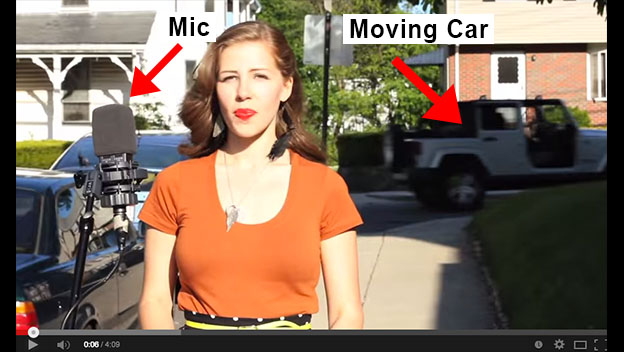 Yet despite these audio hurdles, the video sounds fantastic. Not only that, it was a huge hit with over 2 million views in the first few weeks.

How did Lake Street Dive accomplish this magic feat? Simple: they addressed the limits of what audio could do in the video, and embraced them. They didn’t try to make the mic do too much, and the result is an intimate, warm video with killer sound.

The audio setup captures the band’s personality and their unique sound perfectly. The production value is high, and the band sounds fantastic, but what’s really exciting is how this video launched the band to stardom. Here’s a quote from them:

It took a casually made video featuring the band gathered around a single mic, performing a cover of Jackson 5’s “I Want You Back,” shot on a Brighton, Massachusetts, street corner to grab the public’s attention. What followed was nothing less than a modern-day music business success story.

Whether it’s from a shotgun mic in a studio, a lavalier mic clipped to your sweet blazer, or a microphone on a street corner—quality audio can be the difference between success and obscurity for your video. Invest in quality audio production to give your message a chance to be heard.

Shawn
Born in Southern California, Shawn grew up surfing, eating In-N-Out, and growing his hair long. After graduating with a Liberal Arts degree from CSU Long Beach in 2005 he left the crowded freeways behind and spent the better part of a decade traveling the world living for stretches in Rome, Hawaii, Australia, New Zealand, and Brooklyn. He writes novels as well as copy, loves learning keyboard shortcuts, and plays his grandpa’s old lap steel guitar. You can hear his band at ponieswillbiteyou.com
Latest posts by Shawn
Four Elements Of A Great Video Narrative - 07/13/2019
Why I Didn't Watch Your Video: Low Quality Audio - 03/12/2019
A Video Is Worth 1.8 Million Words - 09/04/2017