Today every company is a global business. Thanks to the internet, the videos your business creates could be seen by people all over the world. But if your video isn’t in their native language, they might not be able to fully engage with your message. Although English is the most common language on the internet, it’s still used by less than 26% of users. Translating video content into other languages is a smart way to reach a more global audience.

Translating your video can also improve your SEO. The most popular keywords in English are difficult to rank for, but it’s often easier to climb the foreign language SEO rankings. In short, video translation can help you reach more people around the world. Let’s look at how to adapt your video to other languages.

Start by Translating the Video Transcript

Before we look at ways to adapt your video, you’ll need to translate your video transcript. First, check that your primary language transcript is error free. Any missed or misspelled words at this stage might be amplified in translation.

If you have someone in-house who is fluent in both languages, you can give it to them to translate. As an international company with a production studio in Argentina, we have a team of employees who are fluent in both English and Spanish. But many businesses don’t have these kinds of internal resources. In that case, you’ll need a third-party translation service.

Make sure your translator understands the voice and context of the video. A literal translation probably won’t be as compelling as an artful one. We’ve had success working with LanguageTran and StudioCenter with positive results in multiple languages.

If you use Google Translate or a similar automatic translator, be careful. Services like these use context words and phrases to choose the most probable translation, not the most natural one. So although the new text may be technically correct, it can sound clunky or awkward. This can make your video stand out for all the wrong reasons. As a best practice, try to seek out a native speaker to check your results.

Subtitles are the easiest way to translate your video. They allow you to put captions at the bottom of the screen in any language without the expense of changing the audio. Subtitles can also increase viewership and engagement. Surveys show that 80% more people watch videos to completion when they have subtitles, possibly because people tend to watch mobile video with the sound off.

Some video hosting platforms have made adding subtitles easy by providing a captioning feature. On YouTube, you can upload your translated transcript and use that file to create captions. You can even set the timing of each line to control when it appears on screen. YouTube will automatically serve the captions that match the viewers preferred language, as long as you’ve provided a transcript in that language.

Ask your video provider for an .srt file. This subtitle file contains timecodes to mark the start and end of the text, to automatically apply the caption related to each timecode. 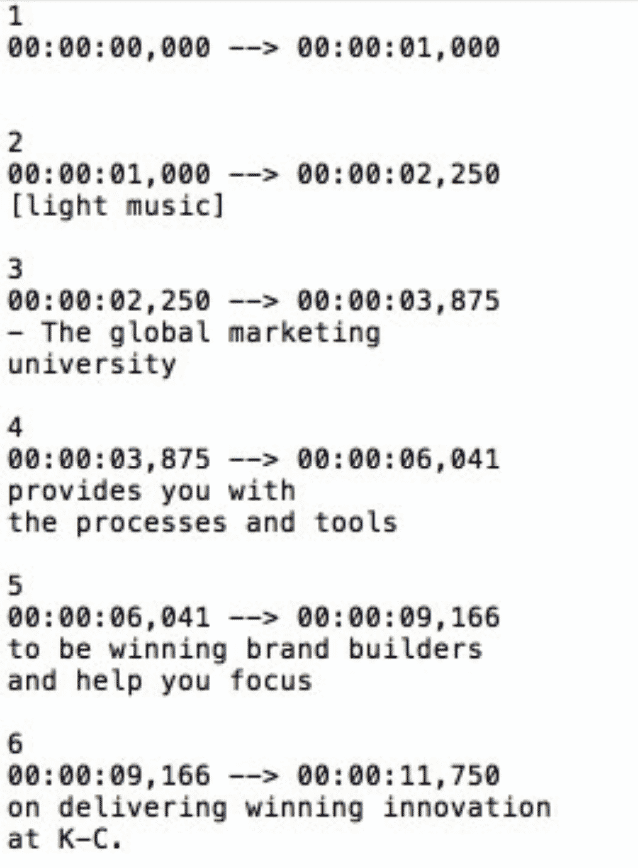 Replacing the voiceover makes your video more polished. Dubbing animation can be almost seamless. Things get a little trickier when you’re working with live action.  It takes more time and resources than subtitling but can make the viewer feel like the video was made for them rather than translated as an afterthought.

When replacing your voiceover with another language, it’s best to get a speaker fluent in that language. They know all the nuances and idioms that language learners may struggle to master.

Since different languages rarely translate word for word you may need to make some decisions about timing. Depending on the languages involved, the length might expand or contract, forcing the voiceover actor to speak too quickly or leave long pauses. Work with your actor to adjust speed and pacing.

On-screen text presents special challenges. It’s more difficult and costly to replace than voiceover. The easiest and most cost-efficient answer is to provide subtitles.

Updating the artwork is more costly, but it’s worth the investment if you have the budget. It creates a much easier viewing experience. The animator will need to edit any frame where the text appears. If the original text was hand-lettered the original artist should be able to redraw the letters in any language that shares similar alphabets. If it’s typed, the process is a little bit easier.

Take special care when translating to languages like Arabic, Chinese, or Russian. Because these languages use unique alphabets, it can be difficult to get the translation right. Drawing these characters requires cultural fluency that the artist won’t have unless they are intimately familiar with the language.

So What’s the Best Option for Translating Video Content?

Translating your script and creating subtitles is the least costly option. Many companies charge by the minute, with rates that vary depending on what language you’re translating to. Since , the recommended length of a marketing video is two minutes or less, a pay per minute translation will fit most budgets.

Replacing the voiceover is more expensive due to the added charge of casting a voice actor. It can get even more costly if you need to spend more time on lip-syncing, but if done well, your video will look more professional.

Replacing on-screen text is the most costly because it’s the most time consuming. It might be more effective to create a video specifically for that audience rather than repurposing an English language one.

For help creating videos that appeal to a global audience, contact IdeaRocket. Reaching international audiences isn’t just a talking point for us, it’s part of our DNA. Our founder grew up in Peru, the Dominican Republic ,and Australia. Today, we are proud of the work our Argentinian production team contributes as employee-owners of our. Contact IdeaRocket to start your international video project.