“I was always the kid who could draw,” says Scott Strong, lifelong animator. “I’d create little flipbooks in the corners of my textbook pages. They were just stick figures, but they’d bounce into frame, jump on a trampoline, bang their head on the page corners.”

An animator at IdeaRocket for years, Scott and I sat down to discuss how he entered the industry, how it’s changed, and what he’s working on in his free time.

GL: Did you always imagine yourself working in animation?

SS: No, not at all. I never expected to get into it as a real career, even though in a weird way I wanted to my entire life. Even though I really enjoyed it as a kid, I was discouraged from a career in the arts. I grew up as a military brat, moving from place to place—my father was in the Navy, and when I got older, I went into the Navy myself, where I had a career for five years.

GL: Do you feel like your time in the military informs your approach todays?

SS: Oddly enough, yes. I’m a veteran of Desert Shield—I was serving on an aircraft carrier, the USS Independence, as an operations specialist. I worked on radar; you’d have to plot this point of contact on a circular graph, and then plot where it was three minutes later, and again and again, figuring out what direction it was traveling in. In a funny way, it was almost like animation.

GL: How did you make the transition to animation?

SS: While I was serving, I slowly realized I didn’t want to pursue a career in the Navy. I started hanging out with an artsy crowd and began to remember that this was something I used to be really good at.

I started drawing again and my friends encouraged me. They were the ones who made me seriously think about going to college for it. Soon enough, I made my decision and went to Parsons School of Design in New York City.

GL: I saw that you worked on KaBlam! for Nickelodeon—that’s a bit of a cult classic for my generation of millennials. What was that experience like?

SS: It was a revelation. That was actually my first animation job straight out of school. I was living in Brooklyn, commuting to New Jersey to work on it at the illustrator’s place, in his basement and garage. We created the Henry and June comic book inspired interstitials. I was just amazed that there we were, just four people, making this TV show.

I was instantly seduced. I had an interest in animation my whole life, grew up a big fan of Disney, Looney Tunes, and comics, but it never really became a real career option until that day. I worked on KaBlam! for the first season, then got a job in Manhattan at Magnet Pictures.

GL: That’s where you won your Emmy, right?

SS: (Laughs). Yes, we were nominated three times and won twice. We won for the intro animation for The Rosie O’Donnell Show. Actually, I also worked as a background painter for Scholastic on a team that was nominated for an Emmy.

SS: There wasn’t a lot of glitz and glamor. My statues came in a box delivered to my house—we didn’t get to go to the ceremony or anything.

GL: Do you feel like animation has changed a lot since you started working in the industry?

SS: Absolutely, it has. When I first started, people were still working with sheets of paper—we were just beginning to scan them and color them on the computer. I’ve watched it go from a very tactile medium to something that’s completely digital. Folks used to work with Oxberry stands: the artist would draw, take their work to this table with a camera mounted above it, and record the frame manually.

GL: Do you feel any nostalgia for the tactile days?

SS: No, not really—I was always a bit more progressive and forward-thinking. I wanted more things to go digital. Ironically though, today I’d like to see a little less emphasis on the big blockbuster 3D movies where everything’s modeled and rounded and perfect. I’ve always been enamored with the 2D aesthetic—I think it has more to offer than what you’re seeing now from feature films.

I’m a big fan of this French school, Gobelins. Their students produce outstanding animations every year. I recently made a short, Toasted Coconut, that’s available online. It’s very much going for that handcrafted feel. 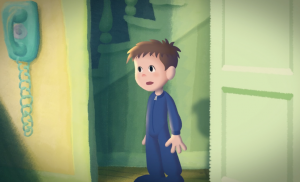 The boy in it is actually my older son—Toasted Coconut is a children’s book company owned by some friends of mine. I had free reign on it, creatively speaking—it was a really satisfying passion project.

GL: Do you have any other passion projects?

SS: I’m producing the opener for my wife’s video blog on YouTube called My Great Challenge—that’s been a lot of fun. I also made a funny Star Wars video in my front yard for my kids. I’ve got two boys, thirteen and eight years old.

GL: Did having kids change your perspective on animation at all?

SS: Yes and no. I get into any project I’m working on, but in terms of what I want to see on TV, I’d like to see more educational shows for young kids. Blue’s Clues and Sesame Street are a lot of fun, but they also teach really valuable, concrete lessons to children. Same goes for shows directed at older kids—I’d like to see more lessons woven in, making academics feel more accessible. More and more, you see just noise on TV—I get that it’s appealing, but now I think about how its affecting kids at that age.

GL: What’s the most gratifying thing about animation, in your eyes?

SS: For me, I’ve always loved that it’s artwork that moves. I used to go to Parsons’ senior thesis shows to reconnect to those roots and see what people are making. I’ll go to a museum, see a painting, and, being an animator, just imagine how it’d move and inhabit its own world.

That’s very gratifying to me. One of the biggest challenges in my line of work is taking this still, soulless thing and injecting it with life. That’s why animating literally means, bringing something to life. It’s art that moves and lives. It’s alive.